There's nothing like saving the best until last. Except weather of course, we like to get the good stuff out the way first. 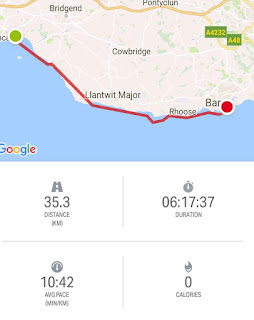 When we set off from Newton Beach in Porthcawl a 6am for the penultimate stage, we knew it was going to be rough. Gusting 21mph south westerly was the expectation. We could handle it. 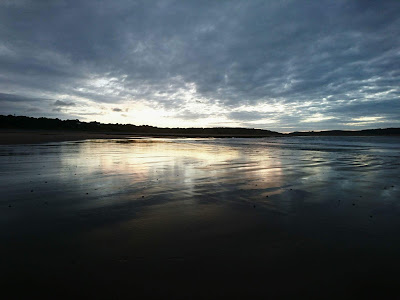 However, we had four hours to reach Barry Yacht Club before the tide turned on us. So we got going at a pace, smashing through the breakers and onto Southerndown. This was where we had to make the big call for the crux of the day. Perhaps of the whole trip. Going solo, we decided it was best to aviod the converging force five tidal races at Nash Point.

We decided to land at Southerndown and went a short distance on to Atlantic College by road where we were met by Simon Neenan in the outdoor centre. Thankfully we could launch again from the slipway on the college seafront.

It was a choppy off this time, and midway through the first set of breakers we realised the rudder steering cables had detached. Thinking better of crashing back through the surf we carried on. It was tough work, with the on-shore wind pushing the aft end shoreward and the nose out to sea, we were having to make constant adjustments - every other paddle stroke was used to correct our course rather than power into the waves which were, at points, above our heads.

So we decided to have a quick land-and-go in the shadow of Aberthaw power station. With the rudder sorted and some flapjacks scoffed, we set off in the direction of Barry.

It was a bumpy ride and a tough one - by the time we reached the Knap, the tidal flow was against us, halving our progress. Never the less, two hours behind schedule we crossed Watch House Bay then Whitmore Bay, finally the lighthouse at the entrance to the docks crept into view. Sanctity.

Then, we had the tidal race across the mouth to contend with. It was even bumpier but after two weeks on the waves, we got the boat through, despite our blurry-eyed tiredness from the 4am wake-up.

We were greeted by a booming and cheerful "welcome to Barry!" from the harbour wall by Vice Commodore, Jack.

After a very warm welcome from members of the club, we stowed the boat in the shed and hung our wet gear for the morning's launch. Scurrying off for a much needed nap, we returned to the yacht club in the evening to be greeted by Commodore Joe Frearson, his wife Lis and a room full of sailors and rowers who had turned out for a fundraising quiz night and raffle to raise money for Sea Beyond Disability.

What an incredible feeling, to be shown so much support and encouragement with the finish line just around the corner. Thank you so much to everyone who came to wish us well. It means a massive amount.

Tomorrow we will be saying farewell to the Club for now, heading to Cardiff - joined en route by the Cardiff Sea Safaris RIB to escort us through the Cardiff Bay Barrage, then heading for the Lookout Cafe party!

It's hard to believe our paddle around Wales is almost over, and one thing is for sure... it wouldn't have been possible without the kindness and generosity of kayakers, soilors and all our other supporters on land and sea who have helped us make this a reality! Thank you.

See you in the Bay...
Cheers,
Ben and Tom