There are certain stretches of Pembrokeshire sea water infamous to kayakers. Jack Sound is one of those. We chose to tackle this particular bit of coast fresh after a good overnight rest at Dale Fort. 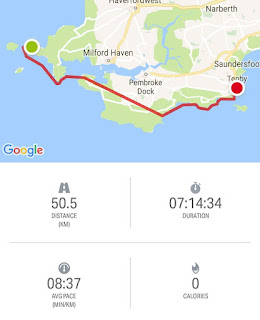 In the morning we were joined by Nige Robinson and Ben Ceredig Fothergill of Sea Kayak Guides - there's not many who could claim to be as experienced here as these two!

We set off from Martin's Haven at the same time as a boat full oof bricks and ecologists were making the foggy crossing to Skokholm Island for a week's work.

We had to contend with fog for the first time on the trip and we were very pleased for the local knowlege and compass-reading prowess of Nige and Ben. Especially as the next thing to come into view was Skomer Island and shortly after that the enormous tide rsce of Jack Sound running alongside.

This was going to be big! Nige went through first followed by us, with Ben to our right. We crashed into the first wave. The next crashed over us. Peak, trough, peak, trough. This was the most intense bit of paddling we'd been through. Water bottles went flying and we almost sacrificed another GoPro. We were being battered but us and the boat would not be defeated.

We got through the Sound but we were not out of the tidal race and after a brief respite in the eddy by Skomer we were back into it. The most confusing set of wave patterns we'd seen on the trip. Front, back, side-to-side, up and down - this was more confusing than working out a hieroglyphic crossword written on a melted rubik's cube.

After the knarly bit of current we crept behind St Annes Head to wait for a super tanker and its tug boat to pass by before we made the final push to Angle.

Landing at Angle, there was just time for a quick group pic with Nige and Ben before they paddled back to Dale and we loaded the boat on the van and drove to Stackpole.

Skipping the active firing range at Castlemartin. Neither of us fancied dodging missiles.

We were met at Stackpole Quay by Mike Greenslade, National Trust manager for the area. And also coming along for the ride were our new boaty buddies from Pembrokeshire Paddlers, Clive Johns and Chiristine Wakeford.

With the fog still thick we headed for Manorbier were an hour or so later Mike left us and we carried on as four to Tenby. Passing Lydstep point we were expecting a lot more flow but it was a rather tranquil passage into Tenby's south beach after going through the gap at Caldey Island.

With the smell of fish and chips in the air and the sands disappearing into dusk, we said goodbye to Christine and Clive and headed for a much needed rest.

Today off to Mewslade via Pendine Sands, hoping the fog will burn off. Looking forward to getting cracking again!