Sometimes changable weather can work in your favour. From what was predicted to be a force three in the long range forecast was much more gentle in reality but gentle comes on a long sliding scale when the words Bardsey Sound are thrown in the mix. 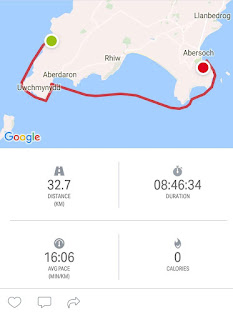 Paddling past Bardsey was quite an experience with back currents whipping the sea up which was even better with dolphins in the distance and the background woops of Geth Roberts who had joined us for the second day, this time with his friend Richard. 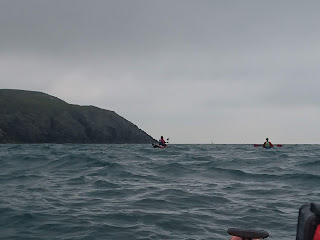 We paddled as a foursome until the edge of Aberdaron Bay where Geth and Richard made their way to land while we took on the bay at Hell's Mouth.

The bay took the best part of three hours, while doing battle with a 10mph southerly wind and a decent swell before we got to the seemingly neverending headland into Abersoch, peppered with rampant jet-ski types, where we were incredibly grateful to catch sight of Oak's van ready and waiting to load our trusty steed. From there it was off to our night stop at the Victoria Hotel in Pwllheli for some much needed R&R and patching up of skinless shoulders.

Next, the mamouth crossing to Barmouth, with our pal Stuart from Sea Kayaking Anglesey to guide us on what could be a 10-hour non-stop paddle!