There are times when you know you're pushing the liimits, and we certainly did that in Aberystwyth. Setting off at 8am, in the first attempted launch off the beach the rear cockpit filled with water and almost rolled us. 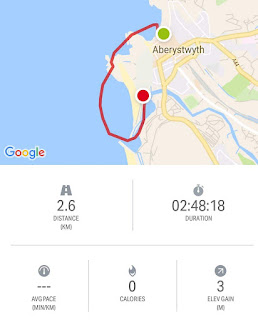 The second attempt was more successful but almost broke the rudder. When we broke through the breakers though, it levelled off. So we thought. With a gusting 24mph wind whipping around the harbour walls and the ebbing tide, the waves were furious. Our highly skilled paddle-boarding companion for the leg, Andy Campbell, was the closest thing to a human gimbal we've ever seen. Riding four foot waves stood up is no mean feat!

But sitting or standing there was no escaping the enormity of what we'd got ourselves into. As we got out into the unprotected waters beyond the harbour we were hit broadside by a monster wave which cleared both our heads by two foot. This was it, we were going in. And with little chance of self-rescue, a coastguard call would have been one  of very few available options.

And this is exactly what happened. But we were spectators when the coastguard did arrive. As was reported later in the day, two men were knocked out of their powerboat and swept out. One was left in serious condition in hospital, the other wasn't so lucky.

The reality of sea we had just faced hit home very hard. The Aber Kayakers met us on the harbour and as we watched the drama with helicopter and in-shore lifeboats in action, the paddling day was at an end. 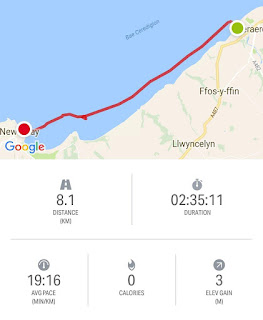 Later though, the wind died down and we still had three hours of the ebb left, we took to the water in Aberaeron, heading for New Quay with Andy. A fantastic paddle followed. We were joined half way by fellow kayaker Tim Richards of New Quay Yacht Club. It was a glorious end to what had been a very scary day.

Today we set off for Newport Sands, with Tim and Ali Davies of NQYC accompanying us with kayak and RIB respectively. This should be a spectacular paddle.