This was always going to be a challenge, and today's paddle was certainly worthy of the label. Starting off in Abersoch at 8am with Stuart of Sea Kayaking Anlesey fame and some gigantic box jellyfish for company, we were greeted bit glassy water and no wind to speak of. Ideal conditions for a paddle. Except this was no ordinary paddle, we were attempting to cross from Abersoch to Barmouth - a potential 10-hour nonstop crossing! Thankfully sense prevailed... 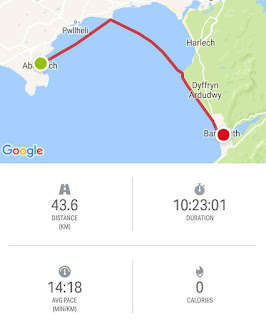 We decided instead to hopscotch and handrail (one of which is an official kayakers' term) our way to Barmouth via the picturesque Shell Island. At which point we were joined by Tony "Pebbles" Gardener - partner to Kylie who joined us on the first day from Caernarfon to Trefor.


It was great to see Tony again at Shell Island after obliterating the largest pasty this side of St. Ives, paddling the surf with him into Abersoch, to be greeted by Kylie, son Tom and Pebbles the very enthusiastic Jack Russell.

And just to add that extra bit of shine to an already glistening day, we were met on the beach by Sam, secretary of the Merioneth Yacht Club to meet their wonderful president, Wendy who served us both with two bottles of Madog's Ale which we happily absorbed while taking in the spectacular view over the other bar.


Tomorrow is possibly the biggest challenge so far - Barmouth to Aberystwyth in a seven-hour tide window and zero landing spots past the 2/3 poin at Borth. Oh, and another 10-15mph southerly in the offing. Brave pills at the ready..!